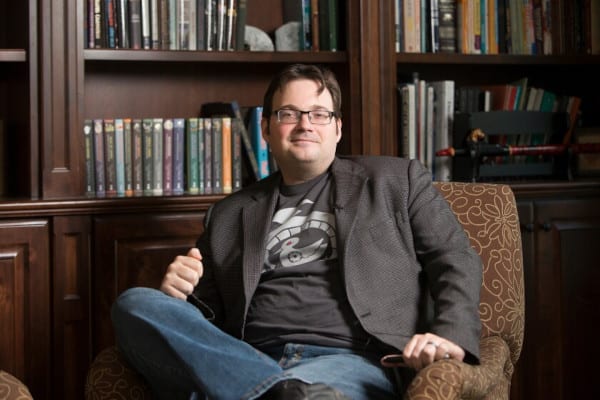 If you aren’t familiar with it, you should go see his video explaining the event – Brandon himself has asked us not to spoil the news, and allow him to reveal it his way, and I’m not going to go against him on this. So watch, then come back here.

Who is Brandon Sanderson?

Brandon Sanderson is one of the most popular and bestselling writers in fantasy fiction. He got his big break when he was chosen to finish the Wheel of Time series after Robert Jordan passed away, but in all fairness he might have reached these heights even without that.

He’s also been traditionally published – by that, I mean his books come out through major publishing companies (unlike, for example, me!).

There’s nothing hugely original about using a Kickstarter to try to get a book (or a series of books) published. It’s been a tried-and-true method for self-publishers to raise money for print runs so they can sell books. Some of Brandon Sanderson’s personal friends (Howard Tayler) have used this method, going back many years. This part of it isn’t new.

What IS sort of new and interesting about Brandon’s approach is that, usually, people going through Kickstarter are the people traditional publishers WON’T touch. Generally, if someone like Brandon, a proven bestseller many times over, had a book to make available, they’d have their agent shop it around the major publishers and SOMEONE would want it (often many someones, which results in a bidding war). There’s no REASON to go to Kickstarter for Brandon Sanderson.

Kickstarter and other methods of self-publishing are almost always reserved for the people who CAN’T get traditional publishing contracts (again, like me!)

Why Would Mr. Sanderson Self-Publish?

Self-publishing is a lot of work. Brandon is going to have to form his own team to contact printers, distribute books, rent space in a warehouse, do marketing – all the things that publishers are good at doing. He’s going to have to learn a whole new set of skills or (more likely) hire people who have those skills, and that’s a huge investment of time and energy.

There IS an advantage, though: money.

He may (or may not) be motivated mostly by money, but there’s no doubt that he could potentially make a lot more money selling his books this way than he could if he went through, say, Tor.

You have to understand that book contracts can get a little complicated, BUT it boils down to this: over the long term, an author is bringing home a certain amount of money per book sold. Multiply that by sales, and you get a rough idea of what they make (yes, there are advances that don’t earn out, but then your next advance is a little less, and over the long term you VERY roughly approach this number).

When you self publish, the money YOU get PER SALE is much, much higher. When you buy a copy of Wistful Ascending I make over $4 US, and it would be even more if I charged what Tor charges for an ebook.

So why does anybody TRADITIONALLY publish?

The answer is probably obvious. I might get more money PER SALE than I would if I went with Tor, but if Tor carried my book I’d definitely have astronomically higher sales. Even if Tor didn’t put out dedicated advertisements for my book, think about all the passive marketing. Their newsletter would have my book in it. Book reviewers would see the book in their lists of new releases each month. If the book is any good at all, a tremendous amount of buzz would come about, simply because it’s in Tor’s catalog.

As a self-published author, nobody knows who I am! Making a higher amount PER BOOK doesn’t help if you can only sell dozens of copies of your book.

Trust me, if Tor offered me a contract, I’d take it.

What Brandon’s done is built up his own name and brand through the traditional publishing world. His publishers have not only included his releases in all their promotional materials, but they’ve sent him all over the world on book tours, put up displays for his books in bookstores, gotten him convention bookings, and generally built him up into an amazingly popular person (I am NOT implying that this is not DESERVED, so please don’t read it that way).

He has supplemented this by doing a lot to connect to his fans – check out his Youtube channel to see what I mean. He is incredibly well known with a passionate fan base that, in all fairness, would probably be smaller, and might not be there at all, if he had never sold a book to a major publisher.

Which is how his Kickstarter raised 14 million dollars overnight.

Does This Change Publishing?

I’m not linking to them, but some people are claiming that this has “changed” publishing. But it really doesn’t.

Other people have used Kickstarters to fund works before – again, they were people who COULDN’T get traditional book deals.

The success of his Kickstarter doesn’t mean that, for example, MY Kickstarter (if I had one) would ALSO raise huge money. His worked because he’s already incredibly popular and famous. Maybe another similarly famous author could replicate this success, but there are no implications for the little people like me.

Is it possible that the really big-name authors are going to start following in his footsteps, leave their publishers, and self-publish AFTER they’ve built up those fan bases? The answer is, we’ll see. It’s a huge risk – almost nobody else is going to be able to fulfill their existing contracts and write a set of extra books at the same time. Few people are as prolific as Sanderson.

Suppose, in the future, the top three or four bestselling authors in each genre decided to switch in whole or in part to self-publishing. That could happen. Or publishers could get wise to this potential loss of income and offer those authors better deals and fresh incentives NOT to do that.

Would that represent some huge change in the market? Not really. If you’re a big reader, look at your shelf. How many of the books you read are written by those super-authors? It’s a pretty small percentage.

Why ISN’T This a Real Change?

What WOULD change publishing is if there were some new path to success laid out for other, new, authors or for other books – if this changed what might appear on people’s shelves (or in their ereaders) in any substantial way.

That isn’t happening. Yes, authors who have ALREADY become wildly popular, using the old methods, might see a way to make extra money. But NOTHING has changed for anybody but those few.

Will DIFFERENT books become available thanks to this shift? I find that, also, hard to envision. I guarantee somebody would have picked up those 4 secret novels and put them in bookstores for him. Publishers aren’t stupid – they know he has a fanbase, that almost anything they put out with his name on the spine will sell like gangbusters.

All that’s happened is that some money that might have gone to Tor (or whoever) will instead go directly to Brandon Sanderson. Which makes very little difference to the rest of us – readers OR writers.

Of course I envy Brandon Sanderson’s success, and of course I wish I had it. But please don’t think I am casting shade here. He DESERVES his success – he writes novels people love, and he obviously works extremely hard doing it. I certainly don’t think he’s doing anything WRONG with this Kickstarter. He made a business choice and it worked out for him.

He doesn’t OWE traditional publishers first crack at his novels – if they wanted that, they could have offered him tons of money for it and given him the option to sign the contract. I am SURE they don’t feel they owe HIM anything. If his books stopped selling, they’d drop him like a hot potato.

Brandon has done something good for himself. Good for him! It’s probably not going to matter to many other people, though, and that’s okay.

← The Future of Post-Jedi Star Wars Do You Trust Your Author? → 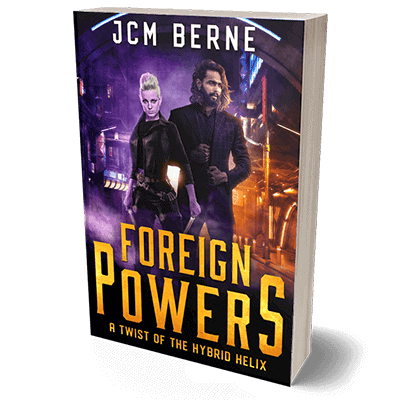